Italy International, Andrea Dossena narrated his embarrassing experience in Harrods. The defender who played in England at Liverpool and Sunderland described being treated “like a terrorist” during his recent arrest on suspicion of shoplifting in Harrods. 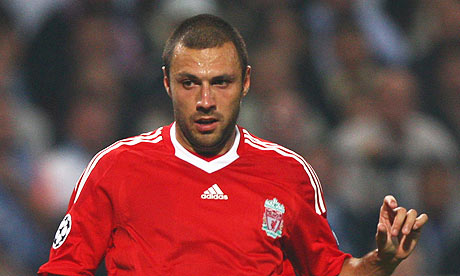 The 33-year-old Italian, who joined Leyton Orient in November 2014 before moving to FC Chiasso, was detained with his wife, Deborah, and young son, Romeo, at the Knightsbridge department store, but all charges were later dropped when the issues were cleared. The left back described the embarrassing experience to Corriere dello Sport. He said:

“When we got to the checkout and paid, I didn’t notice that there was also a pack of dried beef and a jar of honey in our bag. I don’t know how it happened, I’ve no idea.”

When the alarm sounded and staff called police, Dossena said they were handcuffed, “as you would do with a terrorist. I was obviously in disbelief, not only because of that gesture but because I didn’t know what was going on – I hadn’t realised the mistake we’d made.”

“They asked to see our documents that prove our status as residents of London, and obviously I didn’t have them with me – I’d left them at home. So then they took us to the police station, where they held us until half past 10 at night, despite the needs of a two-and-a-half-year-old child. It’s absurd to treat a child this way.

“Two days later the police confirmed I had acted in good faith and the case was closed.” The player complained bitterly about how the police treated him.

“There was no privacy, no respect. I found myself in the headlines – ‘Dossena the thief’. Like I’m going to steal a Rolex.”

He added that he would not be pursuing legal action so as not to draw more attention to the already settled case.